The weather has cleared (no more thunderstorms) and now I'll post some more photographs. One thing I noticed on this trip was how low the Thames River flowed. I don't know if it was because of a lack of rainfall, but it was low. I saw several people searching for artifacts along the river's edge and even a few people sunbathing! (please click on any image to enlarge) 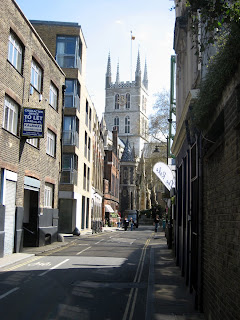 The view in this picture is of Southwark Cathedral, located near the London Bridge underground. It is one of the oldest churches in London. I toured the church but did not take any interior photos. There is an archaeological site nearby that shows an old Roman street and various remains of 12-16Th century ruins. A very cool place. 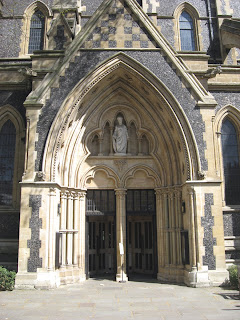 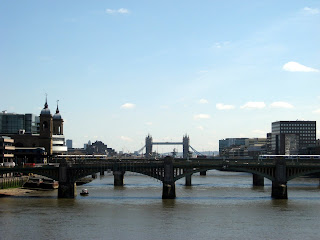 Above is your basic view of the Thames looking toward London Bridge, taken from the Millenium Bridge.
As I walked along the Thames toward the London Eye, I saw a make-shift skate park. I took a video and is posted below. I wished I spent more time here as there were a few pretty good skaters and some kids just having fun.

I will conclude this post with some pictures from the Portobello Market in Notting Hill. Mathias suggested that I venture out to this market on Saturday morning before the ballet performance. He thought I would like it, and he was right! All the tour books suggest that you arrive early Saturday morning in order to get the best deals in antiques and flea market stuff and to beat the hoards of people who come out to browse. I was not too interested in buying so I arrived later in the morning with the rest of humanity. You could hardly walk down the street because of the crowds, but it was an incredible people watching place and prices on antique prints, maps, etc was actually pretty reasonable. One of the best things about this area were the street performers, ranging from a two-woman portable puppeteer theatre, excellent jazz musicians, a classical quartet, and one special guitar hero jammer (see picture below). I will definitely come back here again; there is something for everybody here. 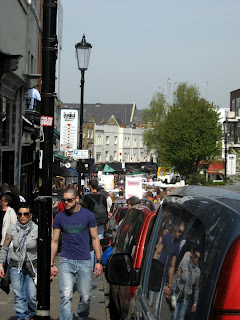 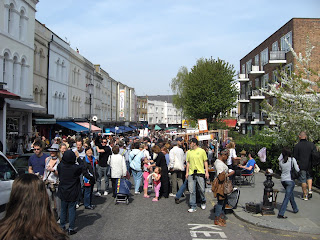 Portobello Market on Saturday morning (click on image to enlarge) 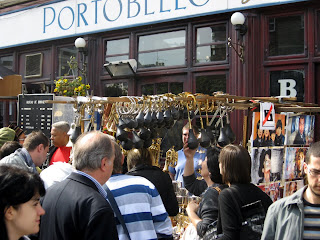 One of the many interesting and unique Portobello vendors. One of my favorite pictures appearing below is of an antiquarian print dealer. His signage was "special" and his prices were pretty reasonable. The butterfly engravings shown in the picture were approximately 30 pounds each ($47) before bartering; I had the same set of images a few years ago and sold mine for about $20-25 plus framing. 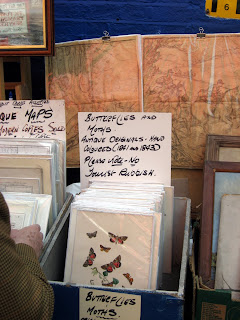 Below is the "guitar hero" player with two fellow jammers. I couldn't resist taking this picture. I have a video but I think this picture is better. 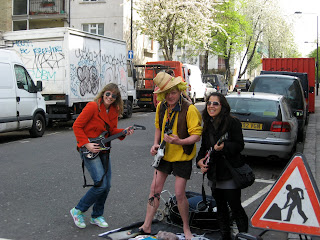 I love to try to take self-portraits of myself. Most of the time they never come out or are awful. However, even I get lucky sometimes. This is yours truly on the Millenium Bridge which spans the Thames between the Tate Modern and St. Paul's Cathedral. Notice the weather. It never rains when I go to England! I'll be cursed for that statement one day. (click on image to enlarge if you dare!)

I was fortunate enough to be on one of the first Trans-Atlantic planes to arrive in London (April 21) after the flying restrictions were lifted due to the recent and ongoing volcanic eruptions in Iceland. I cashed in my Delta frequent flyer miles for a ticket months ago that corresponded exactly (lucky me) with the time when Mathias and Birmingham Royal Ballet (BRB) would be performing The Sleeping Beauty at the London Coliseum. A year ago in April, Susan, Linda and I saw Mathias perform in Sylvia at the same venue and we stayed (thanks to Linda and her Marriott points) at the very swanky Marriott County Hall. Mathias was scheduled to dance the principal role of Bluebird twice, and Susan had already seen him perform in Birmingham last month. On the morning of my flight the air space over the UK was still closed, but my flight from Detroit to London Heathrow had not been cancelled. I flew to Detroit not knowing whether I would fly to England or back home to Columbia later that night. Mathias called me at the airport with the good news that UK air space was suppose to open at 10PM GMT. Our flight time was delayed about two hours but we made it over without any problems. 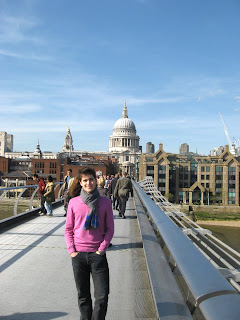 Mathias on the Millenium Bridge. Note the weather. This picture was taken the next day after my self-portrait. I could not have asked for better weather the whole week I was in England. I think it only rained for 20 minutes one night. (click to enlarge)

I met Mathias late Wed. morning at the Coliseum stage door to obtain my ticket for the performance that night, and then caught a train to my hotel in southeast London. The Bexleyheath Marriott, where I stayed for 5 days (on my Marriott points for free!), is located within a 15 minute walk or bus ride from the Bexleyheath train station which in turn is about 35-40 minutes from London Charing Cross Station. This station is within an easy 5 minute walk to the Coliseum. It could not have been more convenient. If you are not in a hurry, one can easily stay in the suburbs and save lots of money in hotels. Normal rates at this pretty nice Marriott (has full sauna, steam room, indoor pool, health club, etc) were 50 pounds/night cheaper than staying in London. The award nights also require significantly less points than the London Marriotts. In addition, for 7.50 Pounds you can purchase an off peak day pass that lets you have unlimited bus, underground, and train travel all over Greater London. You only have to start your trip after 9:30AM. On the weekend the passes are good anytime which is important as you probably should go to the fabulous markets (like Portobello) early. Trains run till midnight and they even have an all-night bus service to this area (although I don't think I ever want to be that adventurous in my old age!). I was able to see and do everything I wanted to do in London and the train ride back to the hotel were relaxing after all the walking I did. I would definitely do something like this again if (when) I return to London. Below are a few pictures that I took on this trip. By the way, Mathias was wonderful as Bluebird. 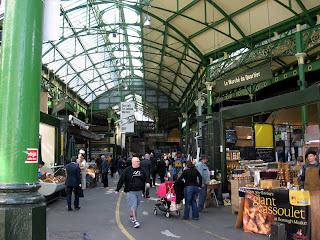 Here is a view of the Borough Market, one of the oldest markets in London. It was not too crowded that day (the busy day is Friday). The food was incredible and the views of the vendors were excellent. 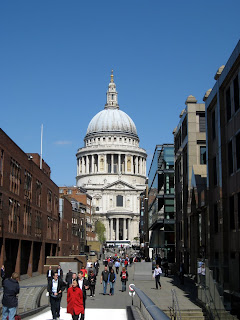 Here is a view of St Paul's Cathedral taken from the Millenium Bridge.

We are having some weather issues here in Columbia. I will add more pictures and talk about more adventures in London later.
Posted by Mouse House at 12:46 PM No comments: