A week in review at The Mouse House

Last night (Saturday, January 26), I attended the annual Columbia Classical Ballet's Lifechance Gala at the Koger Center with Dolly Patton, her daughter Sims and her friend.  They were all "dressed to the nines". Susan was not in attendance as she was returning from a workshop in Cary, NC.  It was nice to see Brooklyn Mack dance again.  I haven't seen him dance in two years and his stage presence is as wonderful as ever.  I am not going to critique the performance; I know better!  It is unfortunate that so few people in Columbia will ever witness Mathias' ballet skills and the superiority of Birmingham Royal Ballet.  For instance last night Mathias and Principal Dancer Nao Sakuma closed the annual Birmingham Royal Ballet's "Evening of Music and Dance" Gala with the Tchaikovsky Pas de Deux.  For a link to their performance, click here. 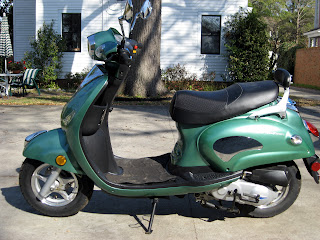 Our new Motofino 50 cc moped.  Click on image to enlarge.

Susan and I now own a new moped.  Last Tuesday I had a rude encounter with a car that pulled out of a parking lot in front of me.  The front of the moped disintegrated into many pieces and required a tow truck to take the rest to car and moped heaven!  I was fortunate enough to be only bruised a little bit; I was wearing a helmet.  It could have been a lot worse.  It only took the Columbia Police 1 hour and 15 minutes and two 911 calls to respond!  I guess that since I was not dead, they did not feel that this incident was important.

Hopefully the poor lady that hit me will help with the purchase; she was driving without insurance (she thought the car was insured... long story), was given a $450 ticket, her car was impounded and her driver's license was suspended.  She was very lucky not to be taken to jail; she was resigned to this fate.  I have spoken to Jerry next door just to be safe.  Hopefully I won't have to go the legal route for compensation.  She has bigger problems than me.  She called the next day to see how I was feeling.

We are three weeks away from our great adventure in Philadelphia.  As a reminder we will be closed from February 13-19 for the trade show. 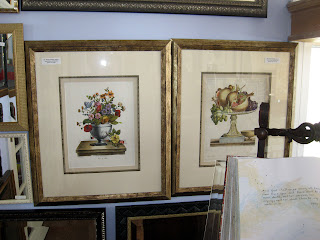 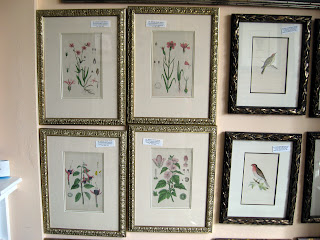 One of the other things on my 2013 agenda is to publish more pictures at The Mouse House and from my travel adventures. 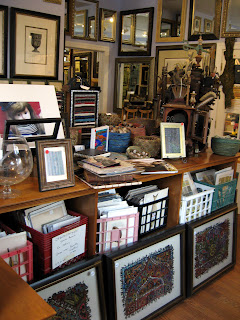 Here is a photo of our front gallery filled with Susan's artwork and hundreds of antiquarian prints.  Click on any image to enlarge. 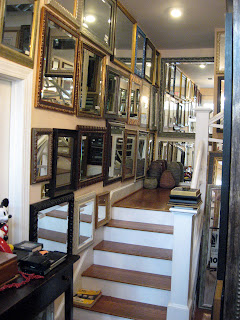 Here is a photo of our front foyer where you can see many framed mirrors.  In fact the walls throughout Mouse House are filled with mirrors.

Here is a photo of the Brighton Wheel taken from the famous Victorian Pier in Brighton, UK.  I visited on December 6, 2012 when I went to see my elder son, Mathias, as the Prince in Birmingham Royal Ballet's production of Cinderella.  It never rains when I go to England!

More pictures will be published soon.
Posted by Mouse House at 3:56 PM 1 comment:

2013 will bring on some interesting changes at The Mouse House.  I will have consistent Saturday hours (10AM-2PM) whenever I am in town.  There will be more of Susan's artwork on display and (of course) for sale.  She has recently finished many framed key pieces (please click here and scroll down to her January 10 post to view this unique artwork in detail).  These make wonderful and affordable gifts ($50-$130) and are all unique Susan creations.


We are busy preparing for our first wholesale fine art craft show on February 16-18 at the Buyers Market of American Craft in Philadelphia.  Susan is hoping for more national exposure and gallery representation, as well as many orders for her stain-glass fiber pieces.  This is an exciting, scary, and potentially life-changing venture!

The Mouse House will have an open house during the Historic Elmwood Park home tour on April 13.  Susan will be present and demonstrating her artistic talents, unless she is fortunate enough to be awarded an artist residency during this time.  We will NOT be participating in Columbia's Open Studios in March as I will be in the UK hopefully watching Mathias fly on the magic carpet or conjuring up some magic as the "blue body paint" Genie in Birmingham Royal Ballet's London performances of Aladdin.

We still have a great selection of mirrors and some really fine antiquarian prints (framed and unframed).  Please come by and shop.